We have numerous expeditions planned for the coming months. We will be producing videos for online publication, as well as keeping our blog posts updated on this site. Here's a list of what we have planned so far;

* KELLY COUNTRY - Exploring the history of the notorious Kelly Gang, smashing the myths, and looking at how their lives and times have impacted modern Australia.

* The NSW GOLD RUSH - We look at the beginnings of the real growth in the population of Australia, the history of the NSW Gold Fields, the establishment of multi-culturalism, and the first anti-Asian race riots in Australia

* CAPTAIN THUNDERBOLT - Following in the footsteps of the famous bushranger Captain Thunderbolt through his Hunter Valley and New England stomping grounds.

* EUREKA - The impact of the Eureka Stockade on Australian society and our laws.

* CAPTAIN CHARLES STURT - We follow in the footsteps of one of Australia's great explorers on his ill-fated expedition to discover Australia's mythical inland sea.

* BOLD BEN HALL - we will travel to the stomping grounds of the famous bushranger Ben Hall, and look into why he had such strong support from members of the public.

* THE SNOWY HYDRO SCHEME - We will discover the amazing countryside of the Australian Alps, and look at the people who came to Australia from all over the world to build one of the greatest engineering feats this country has seen, the Snowy Mountains Scheme, which provides power to millions, and irrigates some of the richest farmland in the country.

A Little Tease... Our First Trip 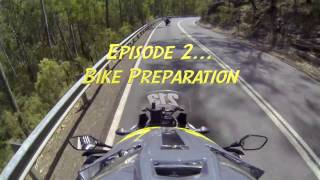